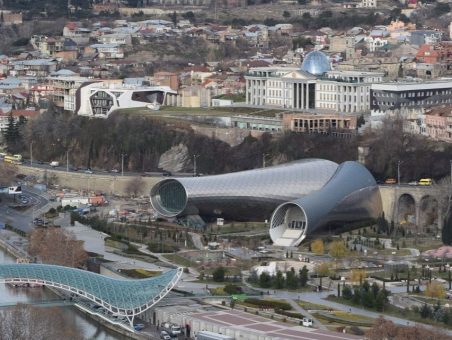 During 2016 and 2017, experts from ENVIROS in partnership with EMPRESS cooperated in the project “Green City Action Plan for the City of Tbilisi“, which was supported by the European Bank for Reconstruction and Development (EBRD) – with financial support provided from the Czech Republic. Several sectors of interest were identified and analysed, and measures were proposed to improve the state of the environment in the capital city of Georgia. In total there were 35 different measures proposed, which are expected to increase quality of living standards in the City and lead to the creation of many new jobs.

The GCAP includes measures to improve areas such as water and wastewater services, solid waste management, energy usage in buildings, renewable energy, local industry environmental improvements, transport and urban mass transportation, urban biodiversity, land-use and improvement of green spaces. Actions were also proposed to enhance the resilience of the city to natural events such as flooding and landslides.

The Green City Action Plan builds on the strategic objectives and priorities of Tbilisi City. It is anticipated that implementation of the measures identified in the GCAP will boost the city’s infrastructure and economic development, as well as reducing CO2 emissions by around 450,000 tonnes per year and saving around 55 million m3 of water per year. In addition, the measures will have significant positive impacts on air emissions, economic growth, job creation, public health and safety, and improved access to public amenities and green spaces.

Also Included in the project were Capacity Building Workshops for city officials and other interested parties, where good practice examples were presented and attendees were introduced to the proposed measures.

The Tbilisi City Government approved the Tbilisi Green City Action Plan (GCAP) in September 2017.  With this approval, Georgia’s capital became the first city to benefit under this new EBRD programme. Following the City elections a presentation was made to the new City Government in December 2017.

Back to previous page